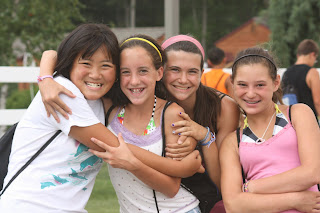 How many of you reading this were literally FORCED out of your house as children to play for 2-3 hours at a time to do whatever? My guess would be MOST of you. My mother used to actually add the charming phrase, "I don't care if you throw rocks at each other!" to make her point- My brothers and I were going outside, and there would be no discussion about it.

Today, how many of you grown-ups force your kiddies outside for 2-3 hours at a time with no specific play-date or plans? My guess would be VERY FEW. Why is this? Play is something that we as mammals were meant to do- it's totally natural. Just watch a bunch of children left on their own- or puppy dogs for that matter. We were meant to play- outside, by the way.

This past winter we had over 40 inches of snowfall in the Philadelphia area, yet in my cute little cul-de-sac with school aged children in most every house- I did not see one snowman. So there I was shoveling my driveway outside, while all the children in our neighborhood were inside watching TV, playing video games, on the internet, or texting. Including my kids, by the way.

In the book "The Power of Play: How Spontaneous, Imaginative Activities Lead to Happier, Healthier Children", author David Elkin outlines how childhood traditions are going the way of the dinosaur- Hop scotch, hide and seek, and games we played as kids are being forgotten. At Liberty Lake Day Camp, some of the most popular activities include playground games like Wall Ball, Ga-Ga (a form of dodgeball) and 4-Square- Because kids have never, ever played them before!

1/3 of schools in the USA have less than 20 minutes per day of recess. In my children's school, Physical Education is on a two-week rotation with Computers, Spanish, Art and Health. And forget about AFTER-school- with hours of homework, sports practice, music lessons, karate, dance- when is there even TIME to play?

We have created a society that limits play for our children.  According to Best Selling Author, Psychologist, and ACA Board Member- Michael Thompson, reasons for this include:
The Kaiser Family Foundation study on SCREEN TIME shows that children age 8-18 years old spend an average of seven hours and 38 minutes devoted to screen time each day. This translates to an average of more than 53 hours per week! Today's children have the lowest rates of play ever; coupled with the highest rates of depression- coincidence? And don't forget increased obesity, stress, anxiety, ADHD, social incompetence, and a loss of contact with nature.

In many ways, Summer Camp has become the antidote to modern society. Campers come to places like Liberty Lake so that parents know they are safe, and so kids can flourish learning the real-life skills that schools don't teach, like: Creativity, Collaboration, Responsibility, Leadership, Critical Thinking, Communication, Adaptability, Flexibility, and what it means to be a Good Friend. Places like Liberty Lake create an extraordinary world that inspires children to believe that anything is possible, and that their potential is limitless. 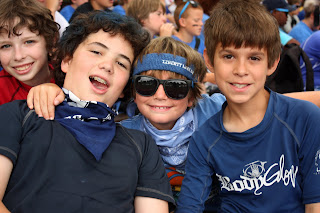 Summer Camp is a step back in time- no cell phones or video games- where social networking involves actually speaking to people face to face, and being someone's friend is much more than an online acquaintance. Camp is the REAL DEAL- and without their parents around, children learn the kind of social independence that many kids won't get until they go away to college. Most of all though, children learn to PLAY, just like the old days. They get to enjoy their childhood doing things that children have done for thousands of years- playing with one another. We need to give our children lots of sunshine while they are young- Because as we know, they are going to need it later!
Posted by Andy-BlogmasterGeneral at 8:56 PM

Hi Andy,
Thanks for the GREAT article!  I agree with everything you have to say.  I often tell my husband that I can’t stand this culture that has evolved where kids are inside all the time.  Many kids we know have enough un-regulated electronics in their rooms to run a small business.  We love Liberty Lake and everything it has to offer, my kids always look forward to going.  And by the way – I do kick my boys outside to play!  Last weekend they came in covered with cold, wet mud from “falling” into our small creek but they were very happy.  I’m sure they will grow up with great memories of Liberty Lake.

Looking forward to another fun-filled summer!

Hey Andy,
Great Article and so true.
Though I am happy to say that John is an outdoors kids. He was outside in the snow making forts this winter and shoveling driveways for elders because it was the right thing to do (no money was taken though they tried to pay him). I attribute this to both parenting and LLDC. He’s attended since kindergarten and wants to be in the Leadership program when he can. He’s learned from camp and hearing our childhood stories the art of “play”, “friendship”, “respect”, “compromise” etc, and all the essential skills he’ll need in life to succeed that cannot be found in a classroom.

Of course he has the new technology like every child, but the novelty wears off rather quickly and he’s back to shooting hoops, playing manhunt (hide n go seek at night) and just being a plain old knucklehead. He’s learned that a camp such as LLD when I was a child was called “CAMPBACKYARDAGAIN” where you ate at whatever house had fluff n utter and you left at 9 am and came home at the 6 pm -- not a minute sooner or you’re mama would be mad! Where you actually called for people by knocking on doors and by 10 am there were 15 – 20 kids engaged in a pickup baseball game, everyone got along or worked it out by racing around the bases and the biggest insult was “your mamma wears combat boots”.

LLDC is one of the best things that we’ve ever done for John.

Hi Andy, excellent article -- a great read, and oh, so true! I know every parent from our generation will relate to this and feel motivated to send their kids outside playing today (even in the rain). We actually had to put a timer on Jack's x-box...crazy! Just went to the middle school orientation and the superintendent gave his opening speech with a demonstration that kids in today's generation are hardwired to "toggle" and seeing them on the IPOD, cell phone and computer at the same time is to be expected and we as parents should understand this change. It's so refreshing to read your perspective on kids in today's society (although I have known your position) and know that while they are at LLDC this summer, they will be getting back to the basics of 'playing' ~ like every summer at your camp :-)

I really appreciated the sentiments expressed in the article you wrote for Suburban Family. I’ll be interested to see if you get any comments from anyone regarding Lenore Skenazy, since opinion about her is pretty polarized. (Generally, I support her viewpoint.) I was raised in NYC and rode the subways regularly by myself since the age of 13. Last year I taught Gabe and Hallie how to take the PATCO into Philly. So far they have shown no desire to exercise this freedom. It’s so much more desirable to ask for a ride to the CH Mall…What a world of difference between my teen years in the city and theirs in the suburbs!

Anyway, thanks again for a thought-provoking interlude in my workday. Have a good weekend and perhaps we’ll see you at Rita’s.